The right to education and the right to equality between women and men are fundamental rights of every human being.  We have known it for a long time, even though it sometimes seems to be fresh information or an unlikely situation for the Romanian context. Equality implies rights, responsibilities, and the same opportunities for women and men, girls and boys; inequality implies discrimination, sexist behavior and the perpetuation of gender stereotypes for one part or the other. “Gender equality is a human rights principle, a precondition for sustainable, people-centered development, and it is a goal in and of itself.”[1] Education is the main source of gender inequality elimination and one of the most important factors which leads to the possibility of employment for women in the labor market, thus leading to their economic independence.

Although in Romania girls and boys have equal access to education (the literacy rate for women between 15 and 24 years old is 97.4% and for men it is 97%[2]), this doesn’t translate into the labor market. Only 53.2% of women have a job, the employment rate for men being much higher, 69.5%[3]. Moreover, the majority of jobs occupied by women are in humanist fields, less in technical fields, and they are poorly paid (education, health, etc.). The situation is no better when it comes to the political representation of women. Only 19% of elected MPs are women.[4] 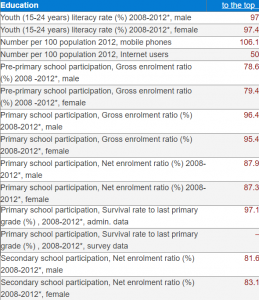 What actions does Romania take for gender equality and education? Where are we today?  It seems that we can take pride in the signing of many conventions and treaties, in having integrated international declarations in the National Strategy for Equal Opportunities for Women and Men, in implementing its recommendations and in the adopting of the international objectives for sustainable development. We give just a few examples. The Convention on the Elimination of all Forms of Discrimination Against Women (CEDAW), adopted in 1979, was signed by Romania in 1980 and ratified in 1982 and the Istanbul Convention (Convention on preventing and combating violence against women and domestic violence), adopted in 2011 by the Council of Europe, was signed by Romania in 2014 and entered into force in September 2016. The 1995 Beijing Declaration and the 2007 Treaty of Lisbon amending the Treaty on European Union and the Treaty establishing the European Community were also signed by Romania since their adoption. Romania is, as most member countries of the European Union, a signatory of all treaties and directives that include aspects related to education and equality of opportunities.

The legislation on equality between women and men is extensive. The Constitution of Romania, adopted in November 1991 and amended and completed by the Law No. 429/2003 contains an article on equality between citizens regardless of gender, but the right to education makes no such reference. Education Law no.1/ 5th January 2011 has many articles that make a reference to the prohibition of discrimination in higher education on the criteria of gender, equity and academic ethics. Law no. 229/2015 for amending and supplementing Law no. 202/2002 for Equality of Opportunities between Women and Men guarantees equality of chance and treatment between them, elimination of all forms of discrimination and measures for promoting  equal opportunities. The third chapter of this law forbids discrimination “based on gender in the matter of women’s and men’s  access to all levels of education and training” and states that it is mandatory for national education programs to contain themes and activities about the equality of opportunities. The Ministry of National Education provides, under this law, “training, grounding and information for teachers, in all forms of education, public and private, on the subject of equal opportunities for women and men”. Moreover, the Ministry promotes […] recommendations regarding academic courses, school textbooks assessment tools, school curricula, guidelines on how to implement the school curricula in a way that excludes gender discrimination and behavior patterns and stereotypes concerning the role that women and men have in public and family life.”

Civil society is also represented by several networks and coalitions that encompass the education and equality of opportunities dimensions; here are a few examples: The Antidiscrimination Coalition, The Coalition for Gender Equality, The Network for Preventing and Combating Violence against Women (VIF), etc.[6] Each non-governmental organization from these networks, alone or in a partnership, carries on activities that can complement national education projects and programs, that are offered or provided by the state. An example is that of the FILIA Center which, through its research projects, awareness raising activities and activism supports equal opportunities and gender equality, the empowerment of women, representing their interests and the involvement in political life, the reconciliation between work and private life, the fight against all forms of violence towards women.

As we can see, both state authorities and non-governmental organizations share the same objectives. Both want to make gender equality a national priority, but, at least from the civil society’s part, skepticism is high. Many of the organizations which study gender equality issues speak firstly of education. Thus, it is desirable to obtain funding for introducing the perspective of gender equality into education and eliminating the problems which jeopardize the access to it.[7] Training for teachers and for the institutions responsible for education (school inspectorates etc.), as well as the training of experts from the civil society, who are to help in learning and promoting gender equality, are desired. Publishing textbooks that tackle key issues such as combating discrimination and gender stereotypes[8], but also the fight against violence, which is also the result of a lack of education about equality and human rights, is recommended. Online published sources would facilitate the access to education for students’ parents or others who are interested.

It is necessary to organize debates, workshops, expositions and other actions, through which both public institutions and non-governmental organizations can promote human rights together, through interactive methods, and lead to the change and/or forming of mentalities. The civil society’s involvement in education projects must be acknowledged and encouraged. Moreover, the allocation of funds for research in this field is necessary. Another method through which education about gender equality can be accomplished is the media, awareness and information campaigns on this subject should not be missing from the online environment.

Not lastly, to encourage law compliance and the implementation of national strategies and of proposed public policies, sanctions concerning gender inequality and lack of education in this matter should be applied to the institutions that don’t abide. The law can be implemented only through political will.

Where are we today, between so many laws and efforts to reduce and eliminate inequality? Romania is ranked last among European countries in terms of gender equality.[9] 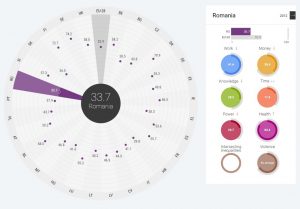 Gender inequality overlaps other forms of inequality, caused by different forms of structural discrimination, and they reinforce the barriers in accessing education. The estimated number of people in Romania without a birth certificate reaches 5.598 people[10] and among them are children who do not have access to education or adults who never went to school. We occupy the first place in the European Union in terms of the number of births among teenage girls, 101.174 girls with ages between 15 years old and 19 years old and 3.787 girls with ages under 15 years old have given birth to a child in the 2010-2014 period[11], but there is still no access to information about sexual education for pupils and students. Besides all this, there is a lack of nurseries and kindergartens compared to the number of preschool children, and the responsibility of caring for them traditionally incumbent on the girls and women in the family. In 2015 there were only 1.097 kindergartens in the urban area and 105 kindergartens in the rural area.[12]Today, we are in a situation where, in a village near Bacau, a girl in the family is the one that will not go to school so she can take care of her younger siblings, while her parents try to ensure food for the family for another day. “One is not born, but rather becomes, a woman.” (Simone de Beauvoir, 1949) is an argument that fails to become obsolete, even though we want it to. One becomes what the patriarchal society fabricates.

Simona Necula is a member of the FILIA Center and has written a thesis on The Controversies Surrounding The Second Sex by Simone de Beauvoir. Her purpose is to put into practice, through activism, that which she discovers from theory. Gender inequality and violence against women are only two of the issues that concern her and mobilize her toward action.

[7] See research conducted within the project  Education without discrimination is also my business!, implemented by the Center for Legal Resources, Mihaela MANOLE, „Combating exclusion from quality education – priorities in terms of public policies”, 2017, source consulted on the 27th of January 2017: http://www.educatiefaradiscriminare.ro/articole/combaterea-excluziunii-de-la-educatia-de-calitate/.

[10] Ministry of European Funds, The social analysis was conducted in the Counties in Romania between the 31st of July and the 15th of September 2015, available here: http://www.fonduri-ue.ro/images/files/transparenta/romi/23.03/Analiza.judetelor.RO.pdf

[12] Data available in the Data and Metadata TEMPO  base of the National Statistics Institute, SCL101D – School Units by School Units and Resistance Environment Categories, available at: http://www.insse.ro/cms/.